One knows sampling has properly started when the most you get to see is either the inside of your eyelids or the contents of a sampling bucket. As we seem to be arriving at a new station almost every day our days are packed. Our schedule should be one long night every three nights but so far we’ve had three long nights in a row. This is actually the first night that is a tad bit more relaxed and allows me to write another contribution to the blog. 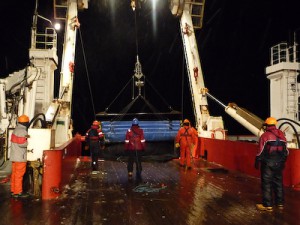 Usually a sampling night starts with some target fishing for krill. For this the RMT 8 is used to sample specific location were the acoustics have indicated the presence of krill. However it has proven astronomically difficult to find krill patches and to successively sample them in large enough numbers for the different studies that are going on. So we often use al if not more than our dedicate time in order to find these ever elusive krill. To make things more fun salps seem to be quite abundant. (Some scientists will say this is only logical but we’re not going to discuss the contents of Nature papers here). Salps are jelly like things, often referred to as the vacuum cleaners of the oceans. For us however they are quite annoying, and beyond the fact that they protect the catch from being damaged by the net there is few positive things to be said. They weigh quite a lot and seem to be blocking anything. Furthermore as the whole catch needs to be processed we need to go through them as well. As soon as everybody is happy with the amount of krill that have been caught, we can move on to other things. This can either be an array of sampling devices with exotic names as the GoFlo, the FRRF, the HPLR, the bongo, the other bongo, the MOCNESS and CTD’s (you cant do oceanography without deploying plenty of CTD’s). Generally these devices require little help from our behalf. So when these are scheduled it’s a slow night for us and we can occupy ourselves with other things. But as told we haven’t had many of those yet. It’s when we deploy the RMT 25 that things get serious. 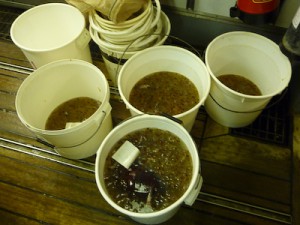 The RMT 25 is probably the larges net on board and like the RMT 8 is composed of two rectangular net that can be opened and closed from the ship. During a night we deploy it twice. First to sample the upper water masses (400 to 200 and 200 to surface) followed by the deeper water masses (1000 to 700 and 700 to 400). The reason for doing it in this order is twofold: first it allows us the most time to sort out the first catch and as these deployments often get delayed, it is better to sample the deeper layers closer to dawn as the behavior of animals will be less affected by the increase in sunlight. As we are all quite keen on fish and other creatures from the depths of the Southern Ocean it seems we al get an extra jolt of energy once the catch is on deck. Because of the large amount of salps this can be a quite difficult job. The first step in the main lab is sorting out all the fish and invertebrates from the salps. Once this first step is done Gabi generally takes control in writing down the different species and quantities. Usually Yves dives into the invertebrates, identifying a wide range of specimen at sight. Meanwhile José and I attack the fish, we sort them by species and when in doubt Yves has a look at the otoliths often to confirm our suspicions. After that it’s measuring time for José and writing time for me. By the time we work ourselves through all of the catches it is often getting light or it is well beyond that point. So while other people are getting up for their shift and a breakfast we get ready for some good shuteye. 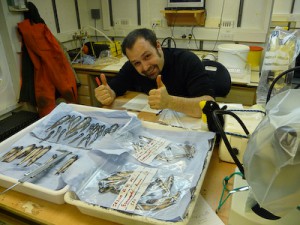 Anyhow working the late shift often gives unique experiences. When we were bringing back the LHPR, a group op chinstrap penguins was feeding next to and behind the ship. From the deck we could see their little bodies darting through the water and occasionally jumping out. Anyhow time to go to bed, before we get blinded by the morninglight……