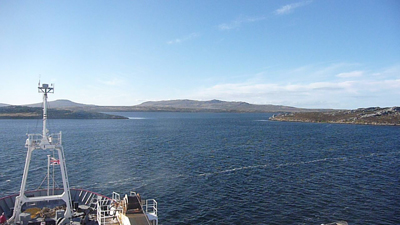 If we had good weather the first day it changed soon. The wind picked up considerably and we were struck by the occasional shower. At last weather that one would expect at the Falklands. Yesterday was al about unpacking gear and lab equipment, or not entirely. Sophie, Peter, David and Min crew who arrived early did such a good job bringing all the big stuff in order that there wasn’t much heavy work left to do. So after venturing onto a fruitless quest around the ship searching for people in need of help, I decided make the best of doing some computer work and tidying in our cabin. Because of all the good work and slowly improving weather we could actually manage to depart earlier than scheduled. 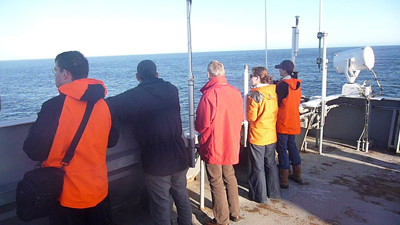 This morning we all received the news that shore leave would end at 16.00 and that we would depart at 17.00 (all in local time).  As the ship inched away from the dock the scientist made their way to the top of the ship, the monkey island. Sailing out of the bay we said our goodbyes to Stanley and the Falklands. Not sooner did we leave the shelter bay of Stanley or we would be greeted by the first wildlife. Around the ship little puffs would appear, a tell tale sing of whales, in this case most likely Sei whales. Although it was hard to tell as they never came close enough to identify them with absolute certainty. As we started upon the open water one jut came close enough for a positive identification. Sei whale after all! In the evening there was a short get together for a birthday. Nevertheless everybody went to bed quite early, to be gently rocked asleep by the ship.

After a series of circumventions with time spent in various vehicles the Falklands have finally been reached: Trains (3,5 hours) buses (3 hours) airplanes (18 hours). Since we just arrived we just have to do personal stuff: getting our stuff to our cabins and getting everything stowed away. However there were more urgent matters at hand: going for a walk. The weather upon arrival was just great 20°C and no wind. After being stuck inside it was great to have the chance to get out and stretch out legs. Soon we were a group of seven, Gabi, Hugh, José, Sebastian, Daria, Ruth and I.

The first destination was Gypsy Cove. On the way we passed one of the postcard marks of the Falklands: an old ship hat ran aground in the same bay were the JCR is docked.

This is a beautiful area with large colony of Magellan penguins. These little guys actually live on beach were supposedly there still could be landmines left from the Falkland conflict. As a positive side effect this provides these penguins with a perfect sanctuary: nobody would ever dare to walk out on their beach. Anyhow I’ll let the picture speak for them selves. 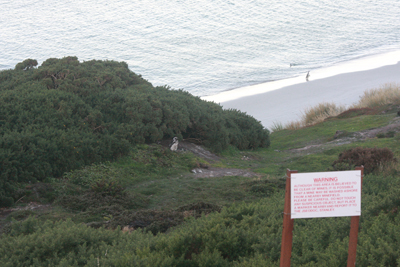 One day left before I’ll go north in order to go South. I must be honest in all the rush of submitting proposals and papers I haven’t had much time to think about the upcoming campaign. So this week was filled with packing and trying to find all the much needed equipment. Anyhow I should be ready to go now. Tomorrow I’ll be going to Cambridge (where the BAS is located). I will stay with some colleagues an we will all depart on Sunday. A flight will take us to the Falklands where we will board the RRS James Clark Ross. For me this is a new ship and a new group of people I’ll be working with on-board. So everything will be quite new and I’ll just have to go with the flow. Nevertheless I’ve already met some of the people on-board on various workshops and conferences. For the third time (out of four) I will be sharing my cabin with a German scientist, so that seems to become a tradition. Anyhow I hope I will be able to tell much more once we sail off.